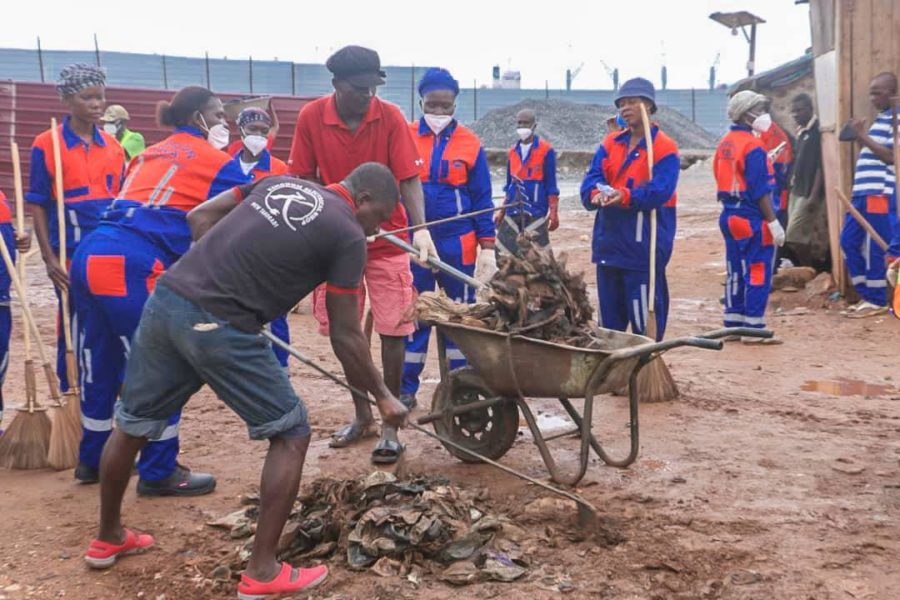 Zoomlion Ghana Limited in collaboration with Graphic Group Communications have undertaken a massive clean-up exercise within the new Takoradi community to raise sanitation awareness among residents on the need to keep their environment clean.

The exercise forms part of a nationwide sanitation dialogue series program aimed at bringing together stakeholders within the sanitation sector and policy makers to achieve government’s vision of a clean Ghana.
The team led by waste management company, Zoomlion Ghana Ltd deployed its workers along the coastal community to sweep, de-silt drains, pick plastics waste as well as educate the community members to desist from open defecation and other improper waste management practices.
Waste management vehicles  such as skip trucks and compaction trucks were busily seen carting heaped waste from various points to the final disposal site.

The Western Regional Manager of Zoomlion Ghana Limited, Mr. Alhaji Abdulai Abdallah who supervised the exercise expressed concern over  open defecation and disposal of waste at unauthorized locations, despite skip containers being placed at vantage points to receive the solid waste.
“Attitudinal problem is one major concern hindering the progress we are making for the region to attain a status of being the cleanest in the country. We continue to invest soo much but if the citizens do not change their attitudes we will still be exposed to health problems”, he pointed out.
Mr. Abdallah touted the 1 million waste bin project being rolled out in the region and charged the residents to  acquire a waste bin to help manage waste at the household level.

PANEL DISCUSSION
The team prior to the clean-up exercise undertook a stakeholder engagement session where various stakeholders within the sanitation sector discussed practical solutions to attain a clean region.
The Deputy Editor of Graphic Business, Mr. Charles Benoni Okine in his opening remarks indicated that Graphic group and Zoomlion Ghana Limited as part of their contribution to attain a clean Ghana is undertaking a nationwide sanitation awareness in all regions by engaging with stakeholders and inculcate good sanitation practices among the citizens.

He said one major challenge identified during the exercise  in the regions was the inability to effectively enforce the sanitation bye-laws and punish sanitation offenders.
“Let’s deal with those non-conformist and punish them severely. Sanitation is a shared responsibility and we should demand accountability from all a sundry”.
He appealed to the media to set sanitation agenda to whip enthusiasm among the public towards maintaining a clean environment
The paramount Chief of Mpohor Traditional Area, Osaberima Kwaw Entsie II who chaired the panel discussion tasked community members to regularly undertake communal cleaning to keep the environment clean.
“The exercise must be enforced and those who do not partake should be punished”, he stressed.
The District Chief Executive of Mpohor Municipal Assembly, Hon. Ignatius Asaah Mensah indicated that government is constructing toilets facilities under the Household and Institutional Support program.
“We have constructed about 13149 toilet facilities soo far  and we are doing more to enhance improved sanitation”.
He commended the on-going construction of Integrated Recycling and Compost Plant (IRECOP) and Faecal Treatment Plant as a game changer that will improve sanitation in the region.

A representative from the western regional office of the Ghana Health Service, Angelina W. Dadzie pointed out that most communicable diseases such as cholera, malaria among others are as a result of poor sanitation.
“This demands that we import more drugs and as we know this also negatively impact productivity as sick people won’t contribute enough to promote development”, She indicated.
The “Graphic- Zoomlion Sanitation awareness campaign” is a nationwide exercise aimed at educating Ghanaians on the need to keep their environment clean.
The Campaign was launched in Accra on April 28, 2021and the various stakeholder sessions have been held at the Ashanti, Eastern, Volta, Oti, Ahafo, Bono, Bono East, Central and western regions respectively.