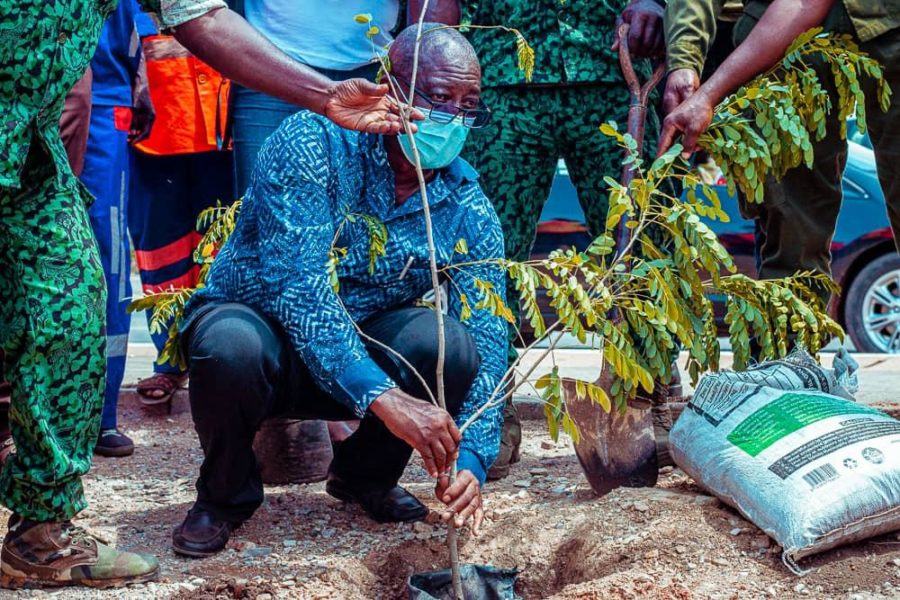 As part of the national tree planting exercise to preserve the environment and restore the country’s greenery, waste management company, Zoomlion Ghana Limited, has partnered with the Forestry Commission to plant over 600,000 trees in the Greater Accra Region.

The exercise, which was replicated in the remaining fifteen (15) regions of the country, kicked off on Friday, June 11, 2021, with Zoomlion workers planting trees in front of the Army Headquarters Amenity Centre Mess opposite the Jubilee House, the seat of government.

The Zoomlion General Manager, Greater Accra Region, Mr. Ernest Morgan Acquah, who made this disclosure while speaking to journalists, said his outfit considered the exercise crucial in preserving the country’s greenery and forest cover.

The initiative is under the government’s Green Ghana Project which President Nana Addo Dankwa Akufo-Addo announced in his 2021 State of the Nation Address in March, to rally Ghanaians together for an aggressive nationwide tree planting exercise.

The Greater Accra Zoomlion General Manager said his outfit was not only involved in tree planting but also providing the Forestry Commission with vehicles to transport the seedlings of the plants and assisting them with a workforce as well.

“We are also helping them [Forestry Commission] with the logistics they need such as watering cans, shovels, pickaxes among others,” he further disclosed.On ensuring that after planting the tree seedlings are nurtured to maturity, he said Zoomlion had in place a strategy.

Furthermore, he said there was an agency that will see to the nurturing of the planted tree seedlings. “…and we are also working in collaboration with the Parks and Gardens. They are constantly on the ground seeing to the greening and beautification of the country,” he noted.

The Acting Director of Parks and Gardens, Reverend Charles Nii Ayitey Okine, who participated in the exercise, commended the government for the initiative, adding that it will have a positive impact on the health of the citizenry.

He said while it was good to plant trees, the initiative must not end there“I have laid emphasis on the acronym PNS—Planting (P) is one stage, Nurturing (N) is another stage, and Sustainability (S) is also another stage. So we have the PNS,” he said.

According to him, the PNS should be a guiding principle for the successful implementation of the exercise.

He commended Ghanaians for their high enthusiasm in the exercise but stressed that it was a continuous process and must not just end at the first stage—planting of the tree seedlings. “We have to nurture it, what type of soil we have to give it, the type of manure and how we can take care of it,” he added.

Rev. Ayitey Okine pointed out that there were certain areas where the planted tree seedlings needed to be protected by either caging or fencing them. He said this was necessary because of the radical nature of certain areas.

“If we are not very careful about it, and we miss that point, we will realise that our efforts will be futile, he advised.

To this end, he encouraged corporate Ghana to come on board and support his outfit in the successful implementation of the Green Ghana Project.

From the Army Headquarters Amenity Centre Mess, the Zoomlion team moved to the Tetteh Quarshie Roundabout where they undertake the same operation.