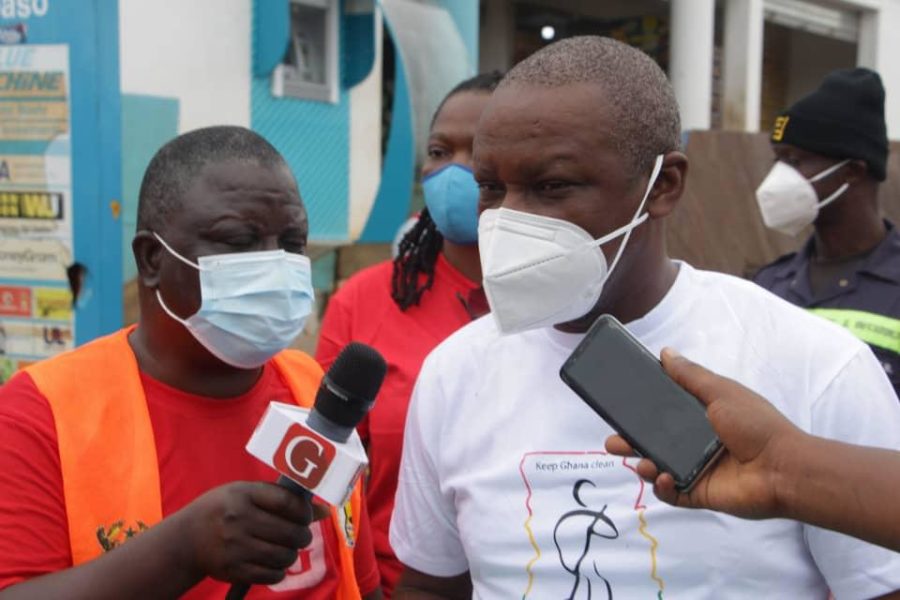 We need wastebins to improve sanitation in Ahafo – Regional Minister

The Ahafo Regional Minister, Hon. George Yaw Boakye has called on MMDAs in the region to partner with Zoomlion Ghana Limited to ensure that every house within the region gets a wastebin to collect the waste that is generated at the household level.

The Regional Minister made this call in a statement read on his behalf by the Ahafo Regional Coordinating Director, Hon. Ebenezer Amoah at a dialogue session organized by Graphic Communications group and Zoomlion Ghana Ltd in Goaso in the Ahafo region.

“To achieve improved sanitation, we need to partner Zoomlion Ghana Limited to get wastebins for every household to help collect waste generated at source. The MMDAs need to scale up the partnership for effective waste collection”, he admonished

He added that plans are on-going to resource the Environmental Health Officers of the MMDAs to engage in aggressive enforcement of the bye- laws to punish sanitation offenders.

Mr. Kwame Asare Boadu, Deputy News Editor at the Daily Graphic in a statement indicated that Graphic Group in partnership with Zoomlion Ghana Limited is undertaking a sanitation awareness campaign through dialogue sessions with stakeholders in the sanitation industry and community leaders to help educate community members on the need to keep their environment clean.

He said the team have held the program in 5 regions and will visit all regions after which the most cleanest region will be awarded.

The Krontihene of Goaso Traditional Area, Yenhyira Nana Kwadwo Kuma II who chaired a panel discussion to deliberate on how to achieve a clean region re-emphasised that “every house must get a wastebin which will help reduce the effect on the communal containers which gets full up frequently due to pressure from the Households”.

The stakeholders agreed that waste bins for households and enforcement of sanitation bye- laws will help achieve a clean Ahafo region.

Community members led by the Omanhene of Goaso Nana Kwasi Bosomprah joined the team to undertake a massive clean up exercise in the Goaso township.

The team which was also joined by the regional police and fire service desilted and washed the drains, evacuated heaps of refuse and educated the indigenes on the need to keep the new region clean.

The Omanhene in an Interview expressed gratitude to Graphic group and Zoomlion Ghana Ltd for selecting Goaso for the clean up exercise.

He said sanitation and environmental cleanliness is a major priority to his stool as he has set aside days for clean up exercises in Goaso.

The Omanhene appealed to government to consider expanding the drains in the communities as increased population and its associated generation of waste water has outlived the drains that were constructed when the town was created in 1912.

The Director of Communications and Corporate Affairs of Zoomlion Ghana Ltd, Mrs Emma Adwoa Appiah Osei-Duah commended the Omanhene for his leadership to organize his people to awaken the spirit of cleanliness by participating in the exercise.

She urged the MMDAs in the Ahafo region not to relent on their efforts to enforce the sanitation bye-laws. “During the dialogue yesterday, the Krotihene expressed Omanhene’s resolve to summon sanitation offenders to his palace and this is a good step in curbing wrong attitudes towards sanitation practices”, She pointed out.

The “Graphic-Zoomlion” sanitation awareness campaign is a nationwide exercise aimed at educating Ghanaians on the need to keep their environment clean.

The campaign which was launched in Accra on April 28, 2021 have witnessed stakeholders visiting Ashanti, Eastern, Volta, Oti and the Ahafo regions respectively.

The team will visit the remaining regions with the hope that Ghana can ultimately become the cleanest country in Africa.