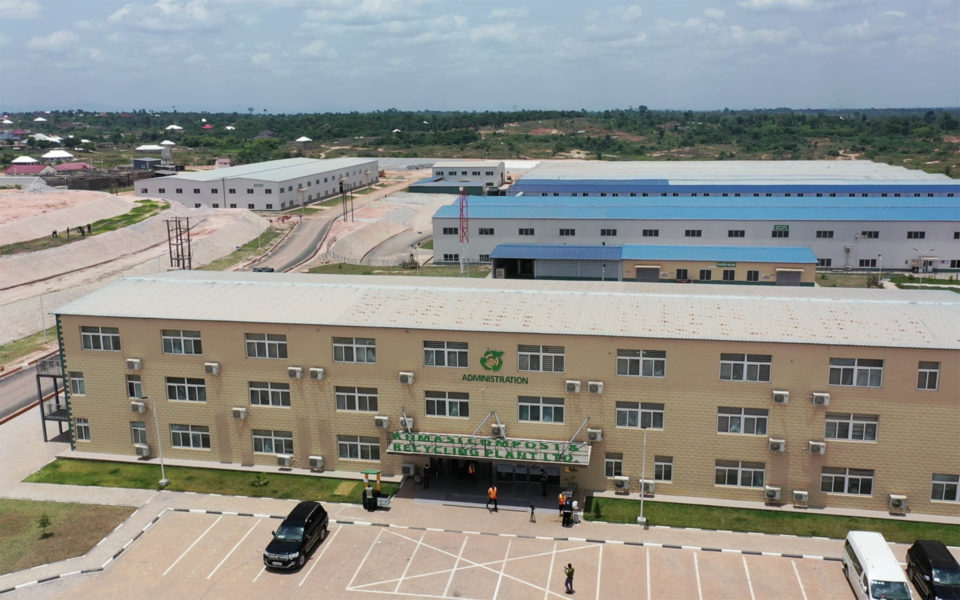 Ghana made history last year when the Kumasi Compost and Recycling Plant (KCARP) the largest in Africa was inaugurated to receive and recycle municipal solid waste in Kumasi and its environs.

The facility which has the capacity to treat 2400 metric tonnes of waste per day on two shifts is the biggest capacity of a composting plant on the continent. The facility begun operations since its inauguration in October 2020 bringing leverage and excitements to the lives of residents of the garden city of Kumasi.

The plant sits on an 180 acres of land in Adegya, Kumasi and has the capacity to treat 2400 tonnes as it hosts various kinds of technologies that receives, treat and recover useful materials from the waste such as compost, plastics, metals, papers among other useful products.

During a visit to the plant to ascertain its effectiveness after its inauguration in October last year, the team was met with a busy scenery of tricycle and waste trucks operators shuttling in and out of the facility to dump their waste.

An operator spends an average time of 5 minutes to dump waste and depart from the facility.

The General Manager of KCARP, Mr. Samuel Ntummy who gave an overview of the facility indicated that Kumasi generates between 1500 to 2000 tons of waste per day. However, he said the excess capacity of the plant was to envisage the future increase of waste generation to meet its treatment demands.

He disclosed that this foresight was what led the visionary Executive Chairman of the Jospong Group of Comanies (JGC) and Zoomlion to inculcate the excess capacity making this recycling plant the largest on the continent in terms of capacity to treat waste. “This facility is a complete integrated recycling and compost plant designed to recover all manner of waste. The plant currently recovers 90% of solid waste of which the remaining 10% residual waste is treated as Refuse Derived Fuel (RDF)”.

Mr. Ntumy pointed out that, the plant deploys a tunneling system to produce the finest compost which is derived from the organic fraction of the waste. “It is worth noting that the tunnel system is the first in Africa being used at KCARP as it guarantees constant supply of compost to farmers and help boost crop production to enhance the agriculture sector”, he explains. He said the plant houses 16 different tunnels that produces over 3000 bags of compost in a single day.

The General Manager further stated that this modern plant is helping contribute to Ghana’s quest to achieving the Sustainable Development Goals (SDGs) such as Climate Actions by minimizing the amount of methane emitted to the environment due to its controlled systems.
Business Development and Communications Manager of KCARP, Mr. Eugene Amo-Asamoah who led the team on a tour of the facility explained that the waste when brought into the plant is recorded immediately on an automated weighing bridge to record its tonnage and then it tips at the receiving bay and which is fed onto the conveyor belt.

He said the various sections of the plant sorts out and recover the organic, plastics, paper, metals, cans, textiles etc fractions of the waste. “The organic waste is then screened to extract compost and further treated using the tunneling system to produce pure compost with a little amount of additives such as poultry droppings. The other elements are bailed and used as raw materials for industries to be re-used”.

Mr. Amo-Asamoah showcased other components of the facility such as sewerage treatment systems, plastics recycling and an engineered landfill site that manages the residual waste. “The park is an industrial enclave that is an embodiment of waste treatment serving other purposes such as academic research centre on waste, recreational centers among others”.

KCARP is a subsidiary of the Environment and Sanitation Cluster of the Jospong Group of Companies who are providing recycling facilities in all 16 regions of Ghana in line with Ghana’s vision of making the country the cleanest in Africa.