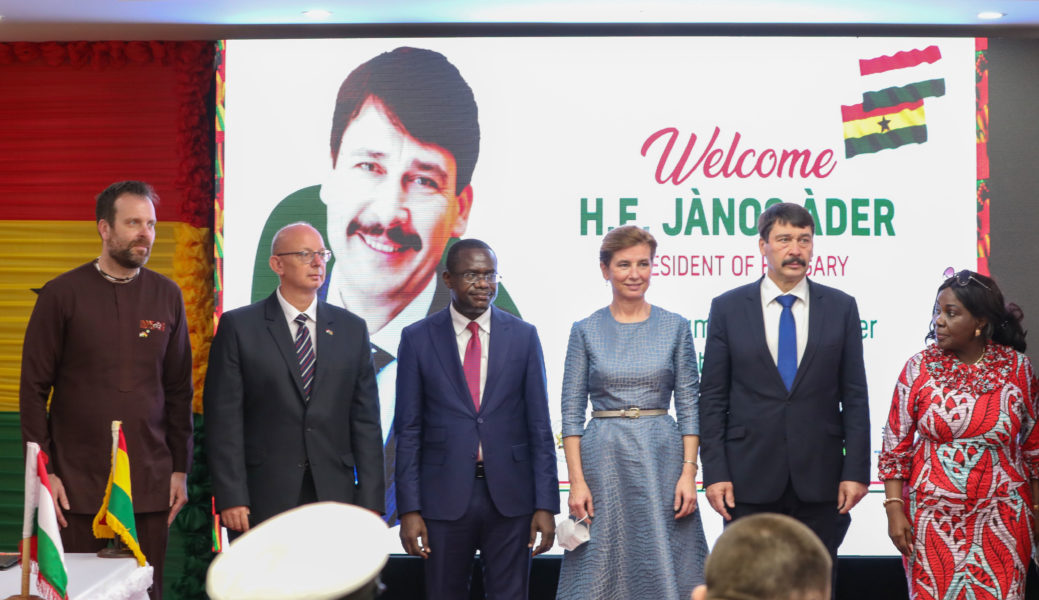 As part of his State visit to Ghana, the President of Hungary, H.E. János Áder on Saturday, January 15, 2022, toured the Kumasi Wastewater Treatment Plant (KWTP) at Adagya in the Ashanti Region.

President Áder was in the company of his wife, the First Lady of Hungary, Her Excellency Anita Herzcheq.

The Hungarian President and his delegation who also included the Hungarian Ambassador to Ghana, Tamas Endre Feher, and the Managing Director (MD) of Pureco Kft, Mr Balint, were conducted around the facility by Dr Siaw Agyepong, together with the Minister of Sanitation and Water Resources, Mrs Cecilia Abena Dapaah, and the Ashanti Regional Minister, Mr Simon Osei Mensah.

The 1,000 cubic per day KWTP, a collaboration between Pureco Kft, a Hungarian private sector wastewater technology leader, and JGC, was commissioned in 2021.

The plant has the capacity to serve over two (2) million people in the Greater Kumasi Metropolitan Area in the Ashanti Region.

It equally has the capacity to receive and treat 150 cesspit tanks of liquid waste trucks on a daily basis.

Significantly, a Memorandum of Understanding (MoU) was signed between JGC and Pureco Kft, as part of plans to replicate the wastewater treatment facility across the country.

The Executive Chairman of JGC, Dr Siaw Agyepong, signed for his group, while the MD of Pureco Kft, Mr Balint, signed for his company, which was witnessed by Mrs Dapaah and Hungary’s Ambassador to Ghana.

In his welcome address, Dr Siaw Agyepong described the Hungarian President’s visit to the plant as historic.

“Today marks a great milestone in Ghana-Hungary relationship as the Jospong Group of Companies has an opportunity, to welcome, His Excellency the President of Hungary, Mr. János Áder, who is on a State visit to Ghana, accompanied by his wife and an official delegation to the Kumasi Waste Water Treatment Plant”, he gladly expressed.

According to him, the strengthened business relationship between Ghana and Hungary has brought loads of benefits to the private sector of both countries, “especially after the visit to Ghana in 2017 by the Foreign Affairs and Trade Minister of Hungary, Mr. Péter Szijjártó.”

“The Jospong Group of Companies took advantage of the new investment opportunity, opened between Ghana and Hungary, after Mr. Péter Szijjártó’s visit, to initiate a number of private sector business consultations with Hungarian Private Sector companies. In the course of our deliberations, we established key partnerships with Pureco Kft, ANY Security Printing Plc and the Hungarian Exim Bank”, he indicated.

That, he added, was with the view of creating business opportunities that will help improve the lives of Ghanaians.

“Mr. President, the outcome of one such technical consultation was the conclusion of a Memorandum of Understanding between Pureco Kft and Zoomlion Ghana Limited for the construction of the Kumasi Waste Water Treatment Plant. The plant, which Your Excellency is visiting today, was constructed by Pureco-Unit Consortium, a Hungarian private sector water and wastewater technology leader. It is the first of its kind in sub-Saharan Africa”, he said.

Dr Siaw Agyepong gave the assurance that his outfit and its partners will ensure the remaining regions benefit from the project, adding that JGC has already commenced discussions to conclude an MoU with Pureco.

“This is to enable the remaining 13 regions of Ghana, which have no access to waste water treatment plants, also to benefit from similar projects under Pureco-Jospong collaboration”, he stressed.

While heaping praise on the Akufo-Addo government for creating an enabling environment for players in the waste management space, Dr Siaw Agyepong commended President Áder for deepening Hungary’s relationship with Ghana.

Earlier, the President of Hungary paid a courtesy call on Asantehene, Otumfuo Osei Tutu II, at his Manhyia .